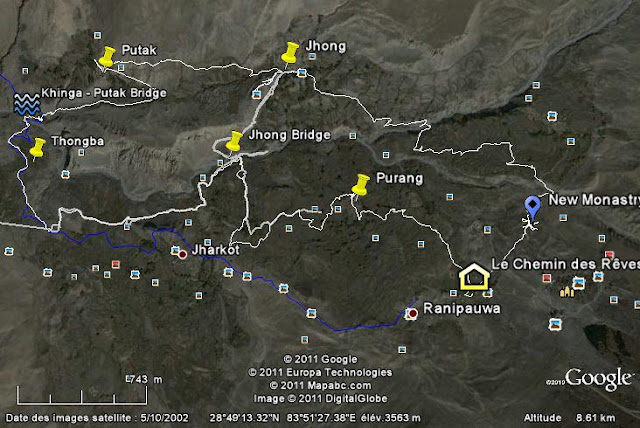 On 24/10, I move up alone by new route from Yak Karkha at 4600m:
After reaching Yak Karkha (4600m) from Ranipauwa with all gears for 2 days , I take the East direction in the hills to bypass the Tawa pass and directly reach the first pass at 5600m.
I started at 07h40 and stopped at 12h40 at 5000m. There was no water on the way (after Yak Karkha), and no water until the pass. There can be water available after winter season or during moonsoon but not at this moment. I stopped where there was some snow left to have water.
Above 5200m The path goes through stony hills and making a camp there seems more difficult without enough snow.
The only practical solution is either to bring water tanks from Yak Karkha or directly move to the pass at 5600m.

On 25/10, after a quiet night I move up to second pass at 5800m
I started at 05h00, clear weather. The way is effectively moving more smoothly in those hills. Main direction is East. It does not reach the Shorten at 5600m but a point between the ridge summit at 5700m and the shorten. There was fresh snow starting from 5600m and above. So I stopped progression at 10h30 at the 5800m pass (snow above the knees). I joined back the camp around 12h15 and due to wind and coming clouds I decided to move back to Ranipauwa reached at 17h00.
The route from the camp at 5000m until pass at 5700m is not so short. I was also searching for the itinerary in the dark the first hour.
By good weather, Yakawa Kang seems pretty difficult viewed from the pass. The normal way from a base camp down the pass at 5600m seems to be a better idea.
A camp at Yak Karkha (4600m) is mandatory, except for acclimatation and rest.
A move up to the Tawa pass at 5000m to make an acclimatisation camp after the rocky towers or nearby the lake on the left side seems also wise. It will allow to evaluate the possibility to move to the first pass at 5700m if there is snow on the sloppy way.
A come down to yak karkha (camp) and a move up to pass at 5700m to put a camp nearby the lake at 5550m. The 6110m and 6050m would be acclimatisation summits.
Then move up after the second pass (5800m) down at 5600m for Yakawa Kang and Purkung.
I will add photos as soon as I find them. I let a copy in Mukinath and I do not have my computer with me now.
I will also add the GPS itinerary merged in a GoogleEarth track.